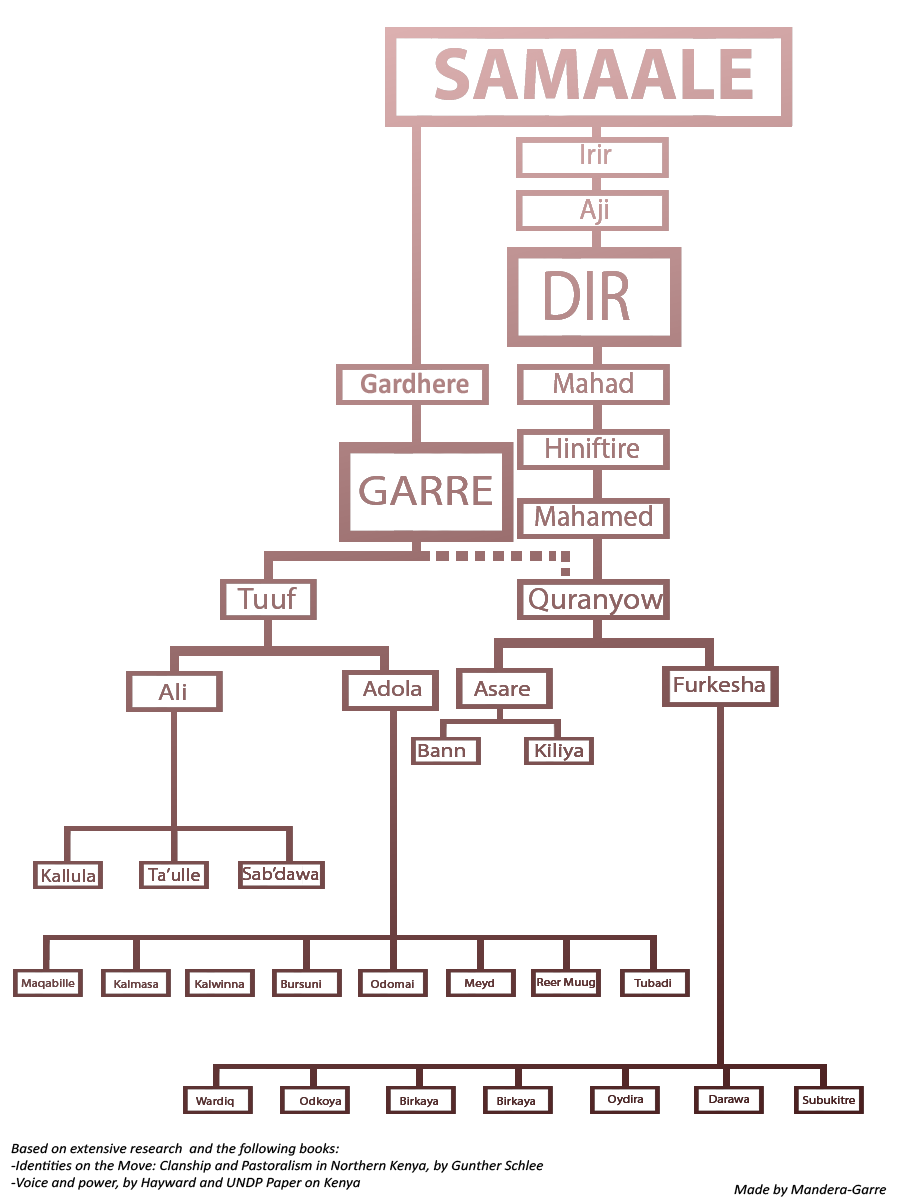 From Wikipedia, the free encyclopedia
Jump to: navigation, search
For the language, see Garre language.
For the politician, see Nilda Garré.
The Garre are a Somali pastoralist clan genealogically belonging to the Samaale and Dir clan. They live in Somalia, Kenya and Ethiopia. In Southern Somalia, North Eastern Kenya and Southern Ethiopia. In Southern Somalia, they live in Kofur near Mogadishu and El Wak District in Gedo Province. In Ethiopia, they live in Moyale, Hudet and Woreda of Liban zone. In Kenya, the Garre inhabit Wajir North and Moyale.[1] They are largely in Kenya and Ethiopia. The Garre claim descent from Samaale[2] although they fall under the Rahanweyn politically in the borders of Somalia as sub-clan of the Digil clan due to isolation from other Garre's, they do not claim descend from them.[3]
Almost all speak the Garre language, though it may be secondary to the Maay speaking sub-clan of Darrawe (Darrawa) who speak Maay as their first language. Their urban centers include Mandera, Moyale Takaba, Banisa and El Wak.
The Garre are divided into the Tuff and Quranyow sub-clans. While the Tuffs are further divided into the Ali and Adola groups, the Quranyow are divided into the Asare and Furkesha. Kuranyo(Quranyow who was married to Tuuf's daughter , genealogically descends from Dir son of Irrir son of Samaale.[4][5]

In the book Identities on the Move: Clanship and Pastoralism in Northern Kenya, by Gunther Schlee , Voice and power, by Hayward and UNDP Paper on Kenya. The Garre is divided in the following clans.[6][4][5]

The genealogical clan tree of the Garre. The Garre split in 2 great sub-clans, Tuf and Kuranyo. The Kuranyo are Garre by marriage. Kuranyow who married Tuf's daughter Mako, became part of the Garre confederation, but genealogically descends from Dir son of Irir son of Samaale.
In the book Identities on the Move: Clanship and Pastoralism in Northern Kenya, by Gunther Schlee , Voice and power, by Hayward and UNDP Paper on Kenya. They stress that the Kuranyo(Quranyow) section of the Garre are of Dir descent.[6][4][5]

The Garri people divide into two main sub-tribes which is Tuuf and Quran (Quranyowa). It is said that the president of Chad came to a refugee camp in Somalia where the Garri people were displaced after the Ogaden war. Hissene Habre of Chad supposedly met with Garri elders in the 1980′s and told them of the existence of Garris (Tuuf and Quran) in his country. In chad, Tuuf is known as Toubou and Quran is known as Gorane.

At a time when Africa was new to independence, the instability, political divisions, and power struggles could be felt throughout the Horn of Africa. Colonial Somalia, Kenya and Ethiopia, are the lands where the Garris lived. The colonialist left the borders for the natives to govern without any tools or organization pre-established for them. After the departure of Colonialism, the new leaders called it upon themselves to establish an identity for their newly acquired borders. Those who spoke Somali created the Somali Nationality. The Garris in Ethiopia meanwhile dealt with oppression not from foreign entities but leaders of their own nation. Those who spoke Oromo created their own nationality which separated itself, and stood as a rebel group against the oppressions of the Ethiopian Government under the rule of Mengistu Haile Mariam and Haile Selassie. The Garris who spoke both of these languages are later given the option to choose which nationality they wish to be a part of. The elders at the time, chose to be part of the somali ethnicity. This option has caused a massive ripple in the understanding and establishing of a Garri identity. Garris of Ethiopia did not speak Somali and did not want to be part of the Somali ethnicity. This is where this blog comes in. Are Garris Somali, or Oromo? Both of these ethnicities are established through politics to create a nationality which fits a particular interest. Somalia is built to create a “greater Somalia” which expands into Ethiopia and Garris are offered to be part of this so they can be of use to this mission. The Oromo ethnicity is established to eradicate the oppression inflicted by the Ethiopian government upon minorities who speak “Oromo”. If this claim of Garris in Chad was actually made by the former president, there is a possibility that there might be a political agenda behind it. But on the other hand, the possibility of truth behind the claim cannot be completely disregarded.

A girl from the semi-nomadic Garri tribe, of southern Ethiopia, peers out from her headscarf, at the Walde Refugee Camp, in northern Kenya. 1993.
All of the information printed about Garri people in more recent years has labeled Garris as Somalis. The picture above says “Garri tribe of Southern Ethiopia”. Contradiction is the common theme on Garri “nationality” or ethnicity. Sometimes It’s Garri tribe of Ethiopia and sometimes it’s Garri Somali tribe.

A toubou woman holding her baby. The physical features of Toubou (Gorane) people are very similar to that of the Garri people as seen in this picture. The item she is holding in her hand, resembles the “idhina” used by Garri people to burn incense.

The Garri amber necklace, on a Toubou woman.

Similarity in the way the woman dress.

The Toubou and Gorane people of chad live a nomadic lifestyle and value camels, just as the Garri of East Africa.

i know you have the children of Furkesha in your site but that doesn't include our name Kilmaale Furkesha... i have looked all over the internet but i didn't find any info about kilmaale... so i started to think that since our people migrated from the quranyow in northern kenya down to bay region, it could have been lost in pronunciation because it was such a long time that even today we are part of a completely different tribe but we still remember our abtirsi. give me your thoughts on this if you have any info regarding this.

i know quranyow are garre and they live both in northern kenya and shabeelaha hoose in somalia.... we are in the Hariin clan of rahanweyn/Mirifle and settle near baidoa a places called, labaatan jarow, goof gaduud, busul, mooro waraabe... so we basically dont even claim or know much about our garre/quranyow/dir side... these days we are basically just Hariin.. however i have always heard our elders talking about that such a long time ago our people were defeated by the oromo and boran in nothern kenya and pushed towards southern somalia... and most of them moved to settle near the river shabelle whereas our group decided to settle near baidoa and joined the Hariin sub clan which we have since mixed, married with and are now fully rahanweyn and the only thing connecting us to quranyow now is our abtirsi.... sow just out of curiosity james, how does a European get into somali clan systems and now is an expert lol tell me a little about that if you don't mind plz its interesting... i say this because couple of years ago when i first came to England as teenager and was going to college i asked some of my English friends what their clans were looool which they hilariously laughed at and made so many jokes about me since then.. to me at the time, it was strange that they didn't belong to no tribes and they were lucky if they knew their great grandfather's name lol sorry about long post


According to the Gharri’s oral traditional history and British colonial era records based on interview they had with then Gharri elders, regarding the origin of the Gharri people, the Gharri people came from red sea coast and settled at “Serar”, what is now known as arusi province of Ethiopia, They build mosques and homes made of stones. Then during the 1600th exodus of people’s movement, from the north reached the Gharri kingdom and fighting ensued because the enemies started looting the Gharri properties and herds. The Gharri were outnumbered and they were forced to immigrate toward southwest, and settled around filtu and Wachile areas.
The Gharri traditional historians state that the Gharri lived there for period of about 60 years without any disturbances. During that time they build stone houses and mosques around filtu and wachile especially around the dawa riverbanks in around fifty miles corridors from Malka Mari through Malka Dirir area.as it were a standard way of building houses. Then later on the exodous of the Borana reached there. It was believed that was the first time they came in contact with the Borana

So, during late 1600 and early 1700, they lived with the Borana. Later on, things changed, and the Gharri were outnumbered by the Boran and the Borana tried to make them subjects and demand tribute. So, the Gharri decided to move back to their previous region of Confur through Juba land.


The "exodus from the north" is Darod Somalis from the Sultanate of Adal out of Ethiopia, specifically Ifat, which had been invaded by Amhara and Oromos, which forced Garre (of whom your ancestors were in the Garre confederation at the time) to leave their lands in Serar (Seraro in Oromo, it's a Woreda https://en.wikipedia.org/wiki/Seraro) and migrate to Wuchale in northern Kenya.

According to the Gharri they chose to leave on their own after pressure from the Borana grew too great, though who knows, anyways they crossed over the Jubba into Konfur. After this, one branch of the Gharri decided to go back and reclaim their lands, but presumably your ancestors decided to stay behind and join the Raxanweyn.

The bit about being originally from the Red Sea Coast is probably close to true, though probably not the coast but rather the interior near Harar.