Posted by DIRSAME at 2:30 PM No comments:

Region 5 Somali Map Showing the Dir clans Gurre, Surre, Gariire, and Gadsan ( Bimaal) These are In Accurate Maps that totally Eliminate Many Dir groups and Areas 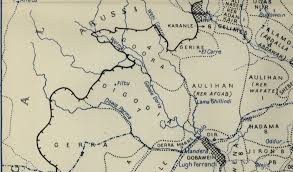 Posted by DIRSAME at 2:28 PM No comments:

Abdi Warsame Isaq was born in Bakool, Somalia. He was Somali Minster of Labor and Social Affaires between 1982 to 1984. And then from the years 1989-1990. He was a member of Said Barre's 12 exectives of the revolution XHKS. (Historical Dictionary of Somalia-By Mohamed Haji Mukhtar). Also he served as Minsiter of Youth and Sports for short period.

Abdi Warsame Isaq was also described as one of personal advisors of President Siad Barre especially in the early periods of the Somali revolution 1969- 1976. After 1976, Abdi Warsame fall out of favour with Barre and was even arrested for a short period or demoted numerous times until the fall of the regime.

Abdi Warsame Isaq hailed from the Biimaal clan of the Dir clan family, more importantly from the Gaadsen branch of Biimaal. Formally allied with Aideed, the chairmain of the SSNM, Colonel Abdi Warsame in 1993 broke with General Aideed and took part of the SSNM with him when he aligned himself with Ali Mahdi.[3][4]

Abdullahi Qarshe (Somali: Cabdilaahi Qarshe, Arabic: عبدالله قارشي‎) (1924–1994) was a Somali musician, poet and playwright known as the "Father of Somali music".[1]
Qarshe was born in 1924 in the Somali expatriate community in Moshi, Tanzania. He belonged to the Muuse Carre sub clan of Habar Yoonis (Isaaq) that mainly inhabits Sanaag region of Somaliland.[2] In 1931, at the behest of his family, he left Tanzania and settled in Aden, Yemen for his education. It is in Aden where Abdullahi had his first encounter with cinema and radio playing western films and Indian and Arabic music, which inspired him to buy a lute to accomplish his new goal of creating music in the Somali language. He was married to Adaiya Qarshe whom he had four children with, Rukiyo Qarshe, Safiyo Qarshe, Anab Qarshe and Mahad Qarshe.
Qarshe, along with other first generation artists such as Ali Feiruz and Mohamed Nahari, was among the pioneers of modern Somali music.
An innovative musician, Qarshe often employed a wide variety of instruments in his art, such as the guitar, piano and oud. He was also known for his poems and his theatrical work at Mogadishu and Hargeisa venues.
In addition, Qarshe was a member of the pioneering Somali musical ensemble Waaberi.
^ Johnson, p.82
Jump up
^ http://www.fao.org/fileadmin/user_upload/drought/docs/Renders%20Terlinden%20Somaliland%20Statehood%202010.pdf

Posted by DIRSAME at 2:45 AM No comments:

In the Mudug region of central Somalia and all the way to Hiiraan region is another cluster of Dir clans known as the Suure. The Suure have been associated with spreading the Islamic faith in Somalia and the Qadiriya Sufi tariiqa in southren Somalia. The Suure are among the most influential Dir groups in Southern Somalia, and their territories include large areas of the Mudug and Galgaduud regions. Also the Suure have founded major trade cities in the Hiiran area including Alaabay and Kamhanley. The Suure are well represented not only in Ethiopia and Shabeele/Jubba region but they have sub-clans as far north as Bari region


And others are names mentioned in Italian and British scholars. The majority of western scholars (both Italian and British) simply refered the Surre as the "Dir of central Somalia" without differentiation and also understanding the Dir group they are discussing all come under either the Qubeys and Abdalle subclans. One reason this happens is not a fault of the Western scholars but the "Surre 's fault. The Surre always refer themselves and identified as first Dir and the as a subclan name. The Surre proudly wore the Dir name as a badge of Honour and their Surre name was almost hardly used.

The Suure Dir also created one of the first organizations to advocate for Dir interests which was the Dir Youth Association 1953 and the earliest political organization created for Dir interests was the “Associzione Gioventu Dir” 1948 and was claimed by the Somali conference as a member.
The Suurre Dir always insisted on the use of the name of Dir and always named any political movements they created as Dir movements, they used the name Dir themselves and sincerly believed that the Dir should unite under banner of Dir name and a common league or party that was named Dir.
Under the guidence of Associzione Gioventu Dir and the Dir Youth Association emerged Honorable Maxammed Cabdi Nuur Juuje.
The Biimaal Dir of Merka and Banadir also created several political movements and were very active। The following Dir parties existed in the early 1950s competing in the Southern Capital Mogadisho। A strong centralized rule of Dir elders, like the Sultan Awad Mohammed of the Surre, and the late Sultan Hussien Guurey, existed in Iskuraran District of Mogodisho, in the early 1940s.
And the Sultan of Merka was active in mobilizing the Bimaal Dir in their political efforts . The Bimaal Union was formed July, 1947, this organization had 3000 members, according to the British Administration, day it was founded which was unequaled by any Somali Party in the South.
Associzione Gioventu Dir (Suure Dir)
Dir Youth Association (Suure Dir)
Somali National League Biyomaal & Mareehan The Biyomaal Patriotic Union 1947 The Bimaal League Somali Patriotic Union Dir (Gadabursi and Issa)

The United Nations and the Italian colonies p-6 1950


Information on the Fiqi Omar subclan of the Dir clan including the manner in which Dir clans compare commonalities and differences could not be found among the sources currently available to the Research Directorate. For detailed information on the  Dir clan and their family tree, please consult pages 144-148 of Patrick Gilkes' The Price of Peace in Somalia, and the appendix on clan genealogies,  which is available at Regional Documentation Centres.


The Dir participated in the Sodere Conference which took place on 3 January 1997 at the Ethiopian hot-spring resort of Sodere, and is one of the major clan families represented in the 41-member National Salvation Council (NSC) created at Sodere and charged with the responsibility of organising a transitional government (Africa Confidential 17 Jan. 1997).


The Cairo Peace Agreement, which was a follow-up to the Sodere Agreement, was reportedly signed in the presence of Egyptian president Hosni Mubarak in Cairo on 22 December 1997 (Africa News 23 Mar. 1998), by delegates of  Hussein Farah Aydid's Somali National Alliance (SNA) and the NCS headed by Osman Ali "Atto" and Ali Mahdi Mohamed (The Indian Ocean Newsletter  6 Dec. 1997, 3). The Cairo Declaration called for another follow-up conference of national reconciliation to be held in Baidoa on 20 December 1997 but this has been repeatedly postponed and is now scheduled to take place on 15 May 1998, funds permitting, although "the real obstacle stems from the refusal of faction leader Hussein Mohamed Aydeed to pull his militia from Baidoa, as agreed in Cairo" (ibid., 4 Apr. 1998).


A 30 March 1998 Agence France Presse report states that two people were killed and five others injured during fighting between Habr Gedir and Dir clans in the Qeyder village in southern Somalia.


This Response was prepared after researching publicly accessible information currently available to the Research Directorate within time constraints. This Response is not, and does not purport to be, conclusive as to the merit of any particular claim to refugee status or asylum.


Lewis, I. M. 1994. Blood and Bone: The Call of Kinship in Somali Society. Lawrenceville, NJ: The Red Sea Press.

I would love to thank you first for the wonderful forum. We need someone to promote and rise our awareness about the illustrious Dir clan.

The orgin of the Suure name

Let me add an old story about the orgin of the Suure name. As we all know by now Suure was the youngest son of Mahe Dir and he was the last one born to Mahe Dir shortly before he passed away, may Allah bless his soul.

It was said by the Dir of old, Mahe Dir one day looked at his youngest son and named him “Suure” which means in old Somali the “Wise one” or literally one who was very intelligent. Know unfortunately, this word is extinct and obsolete in modern Somali,but Suure meant “Intelligent”, Wise as in Somali we use today:

“Kibir iyo Suure badanaa”, which literally means one is full of pride and intelligency. Also the name “suure” is used in the Somali phrase:

Therefore, in the old Somali spoken by the Dir Suure use to mean intelligent one or one who is wise. Now, this is why the Dir elders of Mudug used to say, “Suure” meant the wise one and it is the nick name given to the last born of Mahe Dir.

SHORT HISTORY OF THE SOMALI DIR CLAN BY WARSAME

This is very interesting and your wonderful analysis is mind boggling.

Honestly, I have never asked or even pondered about what the heck “Suure” meant. Isn’t it a bitch, the Suure whether Qubeys or Abdaalle are obsessed with the name Dir, but yet no one ever pondered or told us what Suure meant.

I think the sad thing about the Suure of Mudug region is they forgot their own name, Suure.

Why is it that no one uses the Suure name? Why are we so obsessed with Dir, Dir, Dir and more Dir.

Don’t misunderstand me, I quite frankly love my “Dirness”,but why is it we dont even know out own Suure name and its history?

I think it is a damn shame and disgusting the Suure do not use their wonderful name. Everybody in Somali will tell you they know Qubeys, fiqi muhumad, fiqi walaal, agoon, fiqi yahye, nacadoor, dabac,ahmed farah, Etc. But the name Suure is rarely heard.

I can tell you what Dir means and we all heard that ten thousand times. That freakin Dir means:

But I have never heard anybody explain Suure and its meaning and I love your wonderful insight.

It is extremely neat, fantastic and brillent periodly.

Therefore, in the old Somali spoken by the Dir Suure use to mean intelligent one or one who is wise. Now, this is why the Dir elders of Mudug used to say, “Suure” meant the wise one and it is the nick name given to the last born of Mahe Dir.