The collapse of another democracy in Africa is regrettable. Since their independence in 1960, when their British and Italian administered homelands were hastily united, the Somalis maintained parliamentary institutions and an impartial judiciary. These free institutions survived what amounted to an unsuccessful war with Kenya and Ethiopia to unite the Somali nation throughout the horn of Africa.

Clearly, however, Somali democracy was crumbling under electoral and other abuses. Whether or not the assassination of the President, Abdi Rashid Shermarke, was directly connected with rising opposition, his death brought trouble to a head.

The elections in March a flood of electoral petitions against corruption which were astonishingly dismissed by the Supreme Court after a respected Italian judge had been retired. The government of Mr. Ibrahim Egal, who has been detained, certainly seemed to be overreaching themselves in their desire to stay in power. Admittedly the electoral regulations almost invited the Government to exert pressure. But after the accusations of rigging , there was little possibility of holding elections for a new president which would have been accepted as fair, and in Somalia the president has some vital executive duties. Haji Muse Boghor, whose name was mentioned prominently as Mr. Shermarke`s successor, was known as an associate of Interior Minister, Mr. Yasin Nur.

The takeover by the army and police (as in the anti-Nkrumah coup they worked together) may prove therefore to be popular movement against a ruling clique that had abandoned the rules of fair play as the Somali clans respect them. The new regime will have to be reformists. Fortunately, mineral developments promise a desperately poor land new resources – indeed this prospect may have tempted Mr. Egal`s government to cling to power. But the whole administration needs overhauling, and Somalia`s return to democracy may well take as long as, for example, Sierra Leone`s.

It is worth noting that in Africa Army rule tends to be an interlude. The politicians, suitably chastened for their hubris, are allowed back for their technical skills when the officers see that their popular backing has evaporated. The army in many African states is, in a sense, the alternative government rather than the nominal political “opposition”.

Meanwhile change is in the air among Somalia`s neighbours in the horn of Africa. It is unclear what will follow the leadership of the respected but aged Emporor of Ethiopia and President Kenyatta of Kenya. Bothe countries are threatened with disruption – Ethiopia by Eritrean secessionism, Kenya by anti-Kikuyu feeling. The new Sudanese regime has also signally failed to deal with its southern secessionists. Amid such uncertainties, the Somalis may be glad of military leadership, based on their Russian-equipped but far from Russian-indoctrinated Army, for a period of national consolidation.

Mogadishu, Oct 26. Russian advisors were with the Somali Army throughout last week`s bloodless takeover of power, it was disclosed here today.

When staff of other embassies were refused permission to go to their offices or to leave them if they were already inside, Soviet diplomats had free movement throughout the capital.

Diplomatic sources disclosed that it was initially assumed that the military take-over was inspired by communists. But now they are reluctant to confirm that opinion. “The Somali Army cannot operate without the Russian advisors. And in that case they may just have been doing their jobs. At any rate it is difficult now to see any communist inspiration in the announced aims of the revolutionary Council,” one sources declared.


Piecing together the events of the Tuesday coup, it is now clear that the army acted alone.


The evening before the revolution the ruling Somali Youth League met in closed session and confirmed Haji Musa Boghor as the party`s nominee for the vacant presidency. Army informers inside the meeting disclosed that Mohammad Ibrahim Egal, the Prime minister, intended to rush through the election at a specially called meeting of the national Assembly the next day. By 2 o`clock the next morning, however, troops went into action. They surrounded and captured the police headquarters, took over the radio station and Ministry of Information, surrounded other public buildings, and cut telephone wires inside and outside Mogadishu.

General Korshel, the police commandant, is believed to have won his freedom, after arrest, by guaranteeing police support to the coup.

Mr. Egal and his cabinet were rounded up, along with the acting President, Sheik Muktar.

Mr Egal is now under heavy guard in his seafront home. An armoured troop carrier blocks the front entrance, and another guards the rear. Troops have sealed off streets around the house.

It is widely alleged in Mogadishu today that the army has discovered a £500,000 deficit in a special Government account handling Somalia oil deals.

This weekend General Mohammad Siyad, Commander-in-Chief of the Army, and spokesman for the Supreme Revolutionary Council, met the press for the first time.

In the officers` club at Army headquarter, on the outskirts of Mogadishu, General Siyad pledged the new regime to continue friendly relations with neighbouring countries.

General Siyad is not thought, by many observers, to be the real power behind the revolution. A group of officers of the rank of lieutenant-colonel and colonel are believed to have been responsible for the planning of the coup.

But Mogadishu itself is being run by captains and majors who have taken over different ministers and appear to have absolute authority.

Even now the Revolutionary Council chooses to remain anonymous, and for the moment the streets of Mogadishu are quiet.

Turmoil in a Land of Proud and Hostile Clans

Paris – Of all the countries in Black Africa, only little Somalia – the nine-year-old nation that occupies the almost biblical wilderness of Africa`s Eastern Horn – has anything approaching ethnic unity.

Almost all of its 2.5 million people are Somalis – long-limbed, curly-haired, dark and handsome. But not all Somalis live in Somalia; there are substantial numbers also in Kenya, Ethiopia and French enclave of Djibouti, a valuable port on the Red Sea.

The Somali constitution pledges the country to the reunion of the Somali peoples, and that was a cardinal tenet of government policy in Mogadishu, the sleepy seaside capital, in the early years. The talk of the politics there was to talk of national “irredentism”.

Prime Minister Mohammad Ibrahim Egal, an articulate, studious and relatively unbelligerent leader, took office on July 5, 1967, and immediately set about reducing the tensions between Somalia and its neighbors, which had resulted in a series of undeclared border wars. He succeeded in working out a détente with Kenya and with Djibouti, and as recently as last month was conferring with Emperor Haile Selassie on problems in the Ogaden desert of Ethiopia.

Now all of his efforts have been swept away, and it appears possible that new hostilities will poison the area, which is given great strategic significance by its position at the mouth of the Red Sea across from Aden.

On October 15, a man in a policeman`s uniform shot and killed the President, Abdirashid Ali Shermarke, as he visited Las Anod in the extreme northeastern part of the country, which has been devastated by a severe, two-year drought. It was the third political slaying in East Africa this year; previously, Dr. Eduardo Mondlane, leader of the Mozambique Liberation Front, and Tom Mboya, Kenya`s Minister for Economic Development, had been killed.

Last Tuesday morning, a few hours after the President was buried, the Somali police and army seized power, driving Mr. Egal from office and arresting him and other ministers. The country`s name was immediately changed to “the Democratic Republic of Somalia” – a formulation that in Africa usually, but not always, signifies an intention to move to the left.

It is not clear whether there was any connection between the assassination and the coup d`etat, and the country`s new leaders have done little to tip their hand. But the military and police officers have praised Mr. Shermarke, an unreformed irredentist, and locked up Mr. Egal, the negotiator.

If renewed militancy in Somalia is bad news for neighboring countries, it is equally unfortunate for the Somalis themselves, even though a Soviet diplomat who was on the scene for the coup said that it “seemed to have wide popular support.” The reason is that continued diversion of the country`s limited resources into military spending, without any real hope of battlefield success, can only postpone Somalia`s marginal chances of economic development.

Much had been made of deposits of uranium about 200 miles from Mogadishu, but it is not yet clear whether these will be commercially exploitable. In the meantime, Somalia`s economy depends on the export of bananas to Italy – a trade that has been made more difficult by the closing of the Suez Canal.

The gross national product works out to be about $55 per capita, low even by the hard scrabble standards of Africa. Despite copious aid from the east and West (by some reckoning, Somalia has received more aid per capita in the last decade than any country in the world), the country still lacks roads, schools, port facilities, housing, water, hospitals and almost everything else.

One everyday sight in Mogadishu serves to set the scene. Except for the very rich, the capital`s 200,000 people must buy their water, day by day, form peddlers who lead mules bearing aluminum cans through the crowed streets.

Why was Mr. Egal swept from office? He himself remarked about two months ago that his time was limited, that he had produce both peace some measure of prosperity relatively quickly, and the coup-makers may have felt that that was beyond his reach. He is also charged with corruption and election fraud, but that alone has seldom been enough to bring down an African regime.

In any event, he appeared to many foreigners to be the ablest man on the scene, and whoever emerges as the new strong will find as difficult as he did the realities of running the country – balancing the interests of Somalia`s dozens of proud and antagonistic clans, working out a modus Vivendi with its neighbors, and finding some way to make its sands and scrub a viable place to live.

One Response to Coup in Somalia The Times Wednesday, October 22, 1969 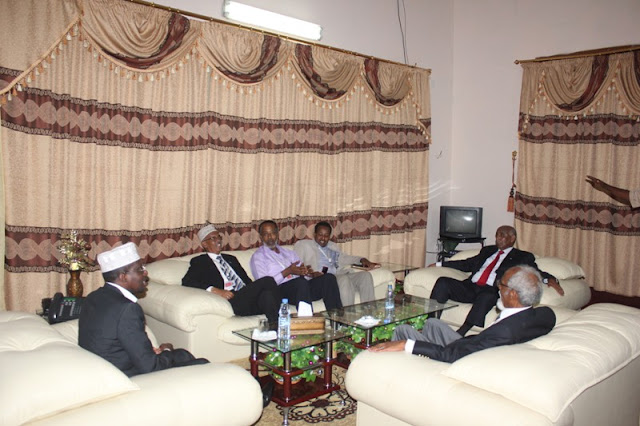 Posted by admin on Aug 28th, 2012 and filed under Warar. You can follow any responses to this entry through the RSS 2.0. You can skip to the end and leave a response. Pinging is currently not allowed.